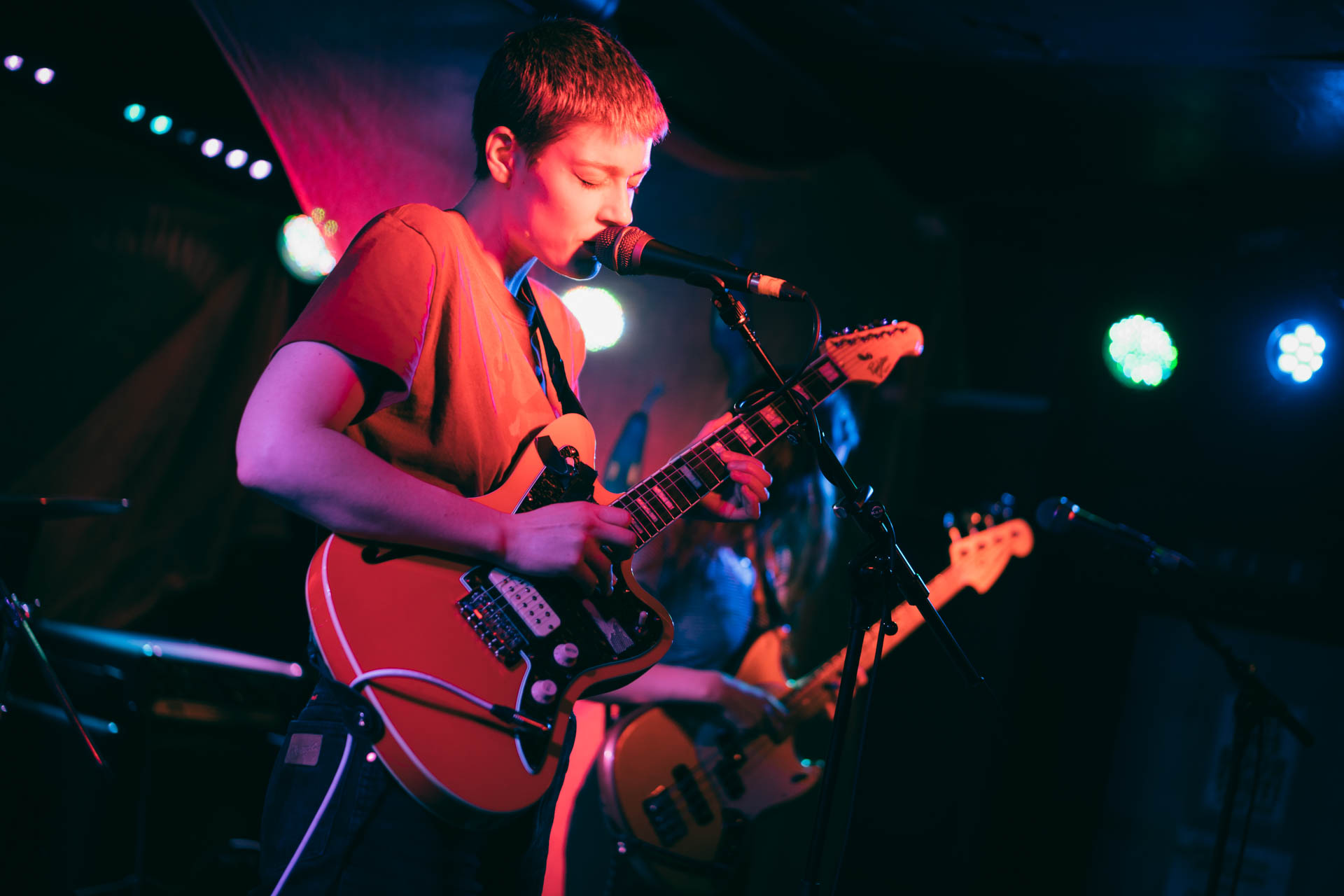 Porridge Radio at the Horn

Despite the Horn being my local venue, tonight was my first night back. Sadly, while there are plans to put in some air-mixing ventilation, at the moment it’s a room I just haven’t felt comfortable going back to as there’s just no air flow. I’ve still been buying tickets as I have a lot of time for the venue and the promoter, who does great work bringing live music to Hertfordshire. Having recently caught omicron, I am a bit more willing to take a chance with what should be a minimal risk to me and me to others.

Tonight Porridge Radio had asked for COVID passes. They didn’t seem to make things much more complicated. While omicron seems to bypass the vaccines and pass maybe isn’t much use now. Lateral Flow Tests have been a way of life for me since gigs returned. I can’t believe that more don’t test before gigs. Tested and masked, it felt good to be back at the venue. With my name on the wall for contributing to its Crowdfunder. I feel this is my venue. I’m so pleased it survived.

I bought tickets for tonight’s gig nearly a year ago. Like many gigs, it has been moved multiple times. With all the recent cancellations, I was expecting this to also be cancelled. Thankfully, it wasn’t the case and with a recent headline performance at Rockaway Beach, Porridge Radio are finally starting to make some overdue headway. So it’s good that they kept the momentum going. I guess this is probably the last time they play these small venues. So I wasn’t going to miss it.

While sold out. It didn’t feel like a sell-out. Understandably, maybe 15% of the audience stayed away. So it never felt too busy.

Opening tonight was Dear Laika. An unusual support, better suited to a seated venue and maybe venues like Cafe Oto. Apparently she’s classically trained and her music seems to want to explore elements of modern classical and experimental electronic music. In all honesty, I hated it. I’ve listened to a lot of music like this at Daylight Music. Most of it better than this. Playing keyboards and adding layers of vocals, which sadly at times were out of tune (the disadvantage of wearing ear plugs is that it is usually obvious when there are tuning issues), some of the ideas were interesting. But the music sounded very muddy.  Unfortunately, there was some guy twiddling nobs adding stupid phaser sounds or compressing the main audio at what seemed inappropriate times. It just didn’t work. Maybe in a different venue with the cleaner sound of a piano it might have worked. Tonight just didn’t work for me.

I first saw Porridge Radio in 2016 at a Shacklewell All-dayer. They were the standout act of the day. At that point, there was only Dana Margolin and her emotional vocals. But she rightly expanded to a full band, giving the songs a bigger dynamic. Every time I’ve seen them since then, they’ve just got tighter and tighter. Dana’s vocals though are still what makes the band special. I love the way on many songs they start off melodic but more often than not trail off into an increasingly emotional repetitive chanting, her voice cracking or becoming ever more frantic as the chant draws you in. ‘Circling’ for example, as Dana’s vocals get more frantic, they subtly crack. As if the emotion is overpowering her.

Tonight, on the back of 2020’s excellent ‘Every Bad’ album and recent headline performance at Rockaway Beach. They were as tight as I’ve heard them. There wasn’t any real weak moments in the set. ‘Long’ being a particular highlight. They now have a core of excellent songs to build longer sets around. Hopefully, we’ll continue to see them kick on in 2022 and feature higher up festival bills.