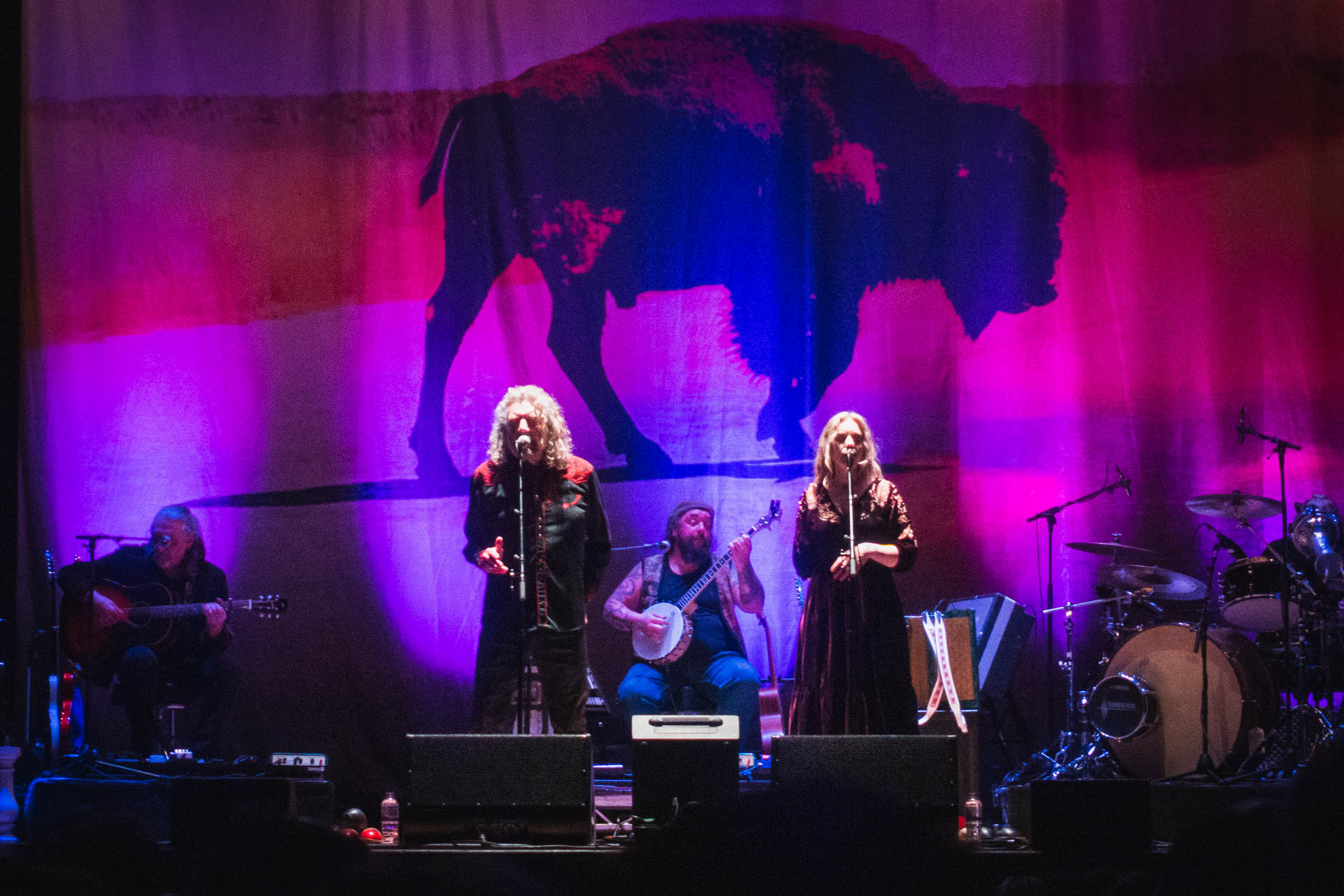 Returning to the scene of my first gig 31 years earlier, was a slightly surreal experience. But somehow appropriate experience for tonight. Having moved away for University, I never really came back to Middlesbrough and I have only been to one gig at Middlesbrough Town Hall, Marillion in 1991. It was odd having my dad drop me off for a gig like I was 17 again.  Have to admit, I could get used to it. Much easier than my usual travel arrangements.

I was at the Town Hall because oddly, Robert Plant had decided to bring his Saving Grace band to Middlesbrough. As he joked mid gig. He thinks the last time he was in Boro was when he brought his then 7 year old daughter to Ayresome Park (I think a 1-0 win for Boro). It was a long overdue visit and it would have been wrong to go to a Hackney rather than to make the trip up to see him play at home.

Many know Plant as the rock behemoth from the 70s. While briefly preforming with Zeppelin for the O2 gig in 2007. He has moved on from Zeppelin and since the 90s constantly reinventing himself. Surrounding himself with talented musicians who are happy to explore Plant’s eclectic taste in music. Tonight reflected many of his musical journeys since then. The most obvious influence being Alison Krauss. With Saving Grace he has again decided to try his hand at duet. This time with Suzi Dian on vocals, Oli Jefferson on percussion and Matt Worley and Tony Kelsey or a range of stringed instruments. Unlike his tours with Alison and Patty Griffin that were influenced by country, tonight was more firmly rooted in the blues and folk side of Americana. Which I have to admit, I much preferred.

On our ‘about us‘ page we say we don’t review covers bands. We prefer to limit this blog to new music. However, there is an exception, Robert Plant. If you have heard his recent stints on 6Music, you will know his wide knowledge of music dating back to early blues. He clearly has an immense love for the music of his youth and the music that influenced his early music career. But from early Zep days he has explored other sounds such the music of North Africa, India, experimented with pop in the 80s and even country with a stint living in Austin. He doesn’t so much cover songs, he reinvents them using all these musical influences. For me it is a glimpse into the magpie nature of bands in the 60s and 70s who took the music they were listening to and reinvented them. Tonight was a voyage into Plant’s musical journeys.

Oddly, except for a short refrain from Blind Willie Johnson’s ‘In My Time Of Dying’ that was reworked by Zeppelin. There were no Zeppelin songs. I think every other time I have seen him, he has featured reworked Zeppelin songs. While I am happy with this. I wonder if some in the audience were left disappointed, after all, it was the first time he has played Middlesbrough. Musically, this was closer to Sensational Spaceshifters than the country influenced Band of Joy. With songs like ‘Everybody’s Song’ taking on a North African feel and others more traditional blues or folk flavour. Personally, I am thankful the country twang was missing as I found it detracted from Band of Joy gigs.

Part of the joy tonight was Plant giving us his insights into each song with anecdotes about events and people in his past. Whether a quip about Paul Rogers or a story about Donovan selling him a knackered car. Like his recent radio show, it was a delightful insight into Plant’s life.

The other major part of why tonight was successful was Suzi Dian’s warm rich vocals that perfectly suited Plant’s. For me, this is the best paring so far. There also was genuine chemistry between the two and she was happy to poke fun at him when he started his story about Donavan on the wrong song.

There were some things I didn’t. Like. It was a seated gig and the old audience stayed seated throughout the evening. ‘Down at the Front’ was in row P with no photo pass. So this wasn’t a night for photos. The Middlesbrough audience were also more subdued than I would have expected. But these didn’t overly detract from the evening.

Tonight was about musical journeys. Mine, returning to where it all began and Plant taking us through music that influenced him. I love how comfortable Plant is with his music now. As he has matured, so has is music. This is how musicians should grown old. Leave the rocking to the youngsters and concentrate of your love for performing. A really nice evening and I am so pleased I made the trip home.