Teeth of the Sea at Electrowerkz

I caught Teeth of the Sea supporting Goat last year. When they first climbed on the stage I made an instant judgement that I wouldn’t like them and even at the half-way point of their first song I really wasn’t sure because the music seemed heavily electronic-based rather than performance based. But then they hit the midpoint and the drums came in and the guitars came in and performance transformed from a ‘meh’ to ‘wow’. By the end of their set they’d converted me and I bought an album as I left and the next day bought their other album. Both albums mixed electronica and guitars in just the right amount to create a fantastic sound full of ideas and invention. Honestly, if it wasn’t for their live performance this evening, I’d never have given then band a second look.

I always try to catch an impressive support band’s own headline set. I should have seen them in September but couldn’t make the gig. So this was the first opportunity to see if they were as great live as I remembered.

First up was a band called Evil Blizzard. It would be easy to call them a novelty act. Four bassists, a singing drummer, oh and the fact that they all wear masks so that they look live escapees from a horror film. But that would be doing them a great disservice. Yes, clearly they’re all mentally unhinged and you wouldn’t want to meet them in a dark alleyway. But they produce a fantastically dark doom-laden sound. I’m not sure what to compare them to. But think of them as the kind of band Freddy Krueger might listen to on his night off. At one point, they even jumped into the crowd with a theremin in the shape of a headless doll. Catch them if you get the chance. Just make sure you don’t walk down any dark alleyways afterwards. 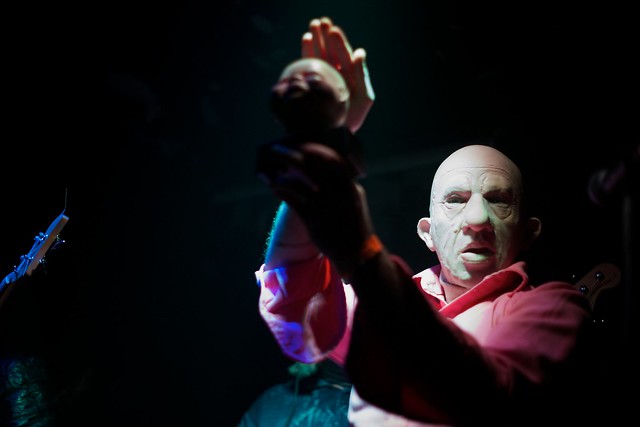 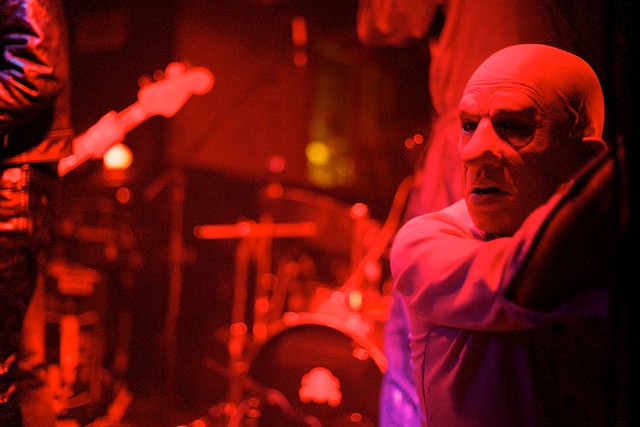 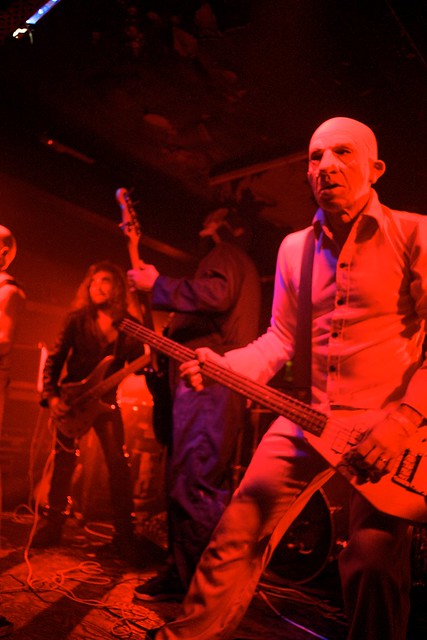 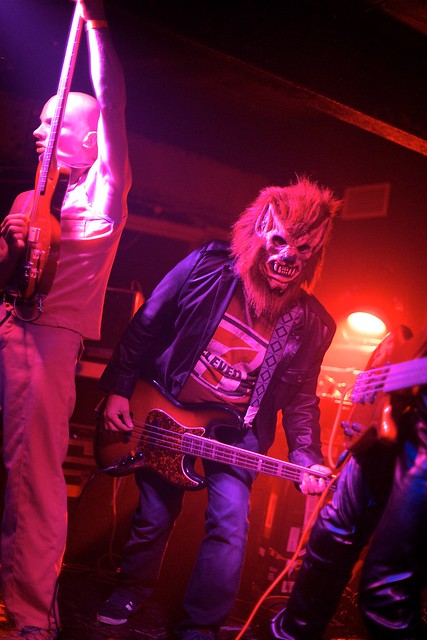 Next up was Bass Clef. To me he’s a dance DJ. I’m not sure what he would call himself, probably an electronic artist? Whatever he is, he’s one of those kids who twiddle knobs on stage that seem to produce sounds like they’re being produced by a C64’s SID chip. I’m sure it’s all very difficult, but to me it was boring as hell. Even trying to mix a trombone into the performance didn’t save it. To all these artists. You’re all probably talented, but please try and find some different sounds. Lets stop trying to make music that sounds like a 8-bit computer game soundtrack. 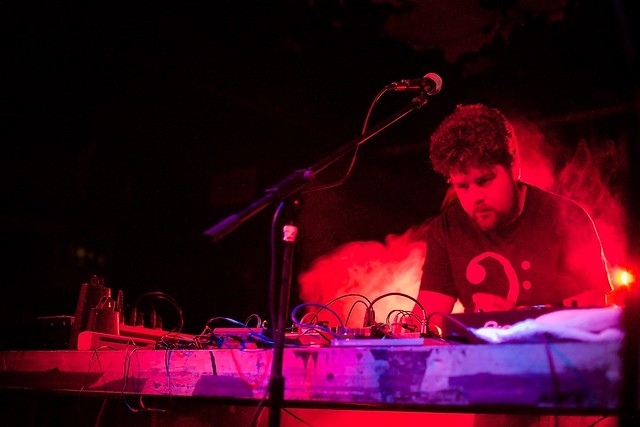 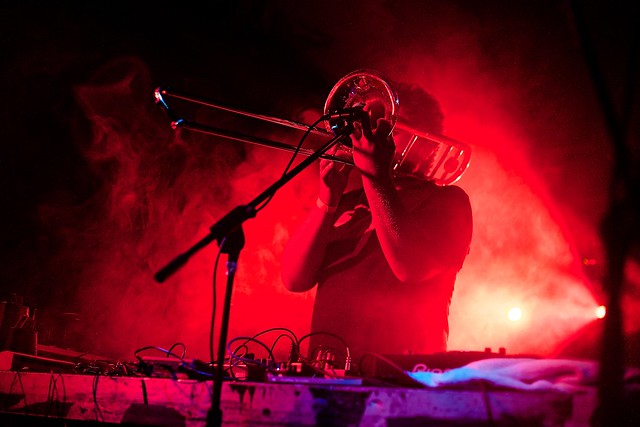 After the disappointment of Bass Clef, TOTS entered centre stage. Drawing heavily on their well-reviewed new ‘Master’ album, I think they started with the same song as their Goat gig with it’s repetitive sampled dance beat. This time I was more willing to accept the lead-in because I knew there was a pay off. Once the drums kicked in the performance just got better and better.

Unlike most bands, where the drummer’s seated and hidden at the back of the stage. TOTS have built their performance around the drumming. The drums are centre stage and setup to be played standing. 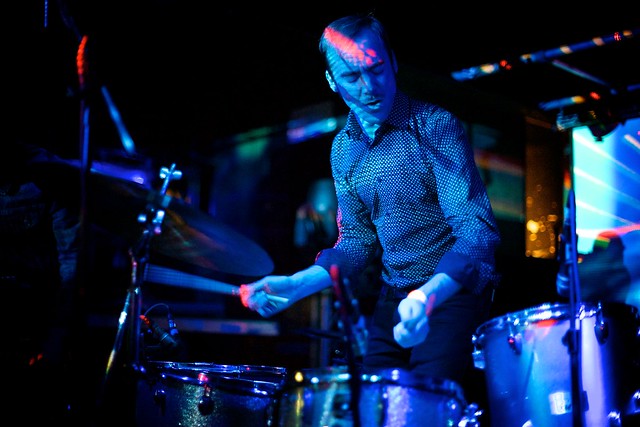 I was standing at the front, so I got a chance to watch them perform from close quarters. I’m not sure if I’m doing the other band members a disservice, but it seemed to me that the drummer acts at times like a conductor, keeping the count and communicating with the other band members when to come in and when some of the longer rhythmic sections are to finish. It helped me appreciate the hidden complexity of keeping the music from all the various pieces of kit in line with each other. Especially when he has to put on headphones so that he can match his drumming with the cyclic electronic samples. 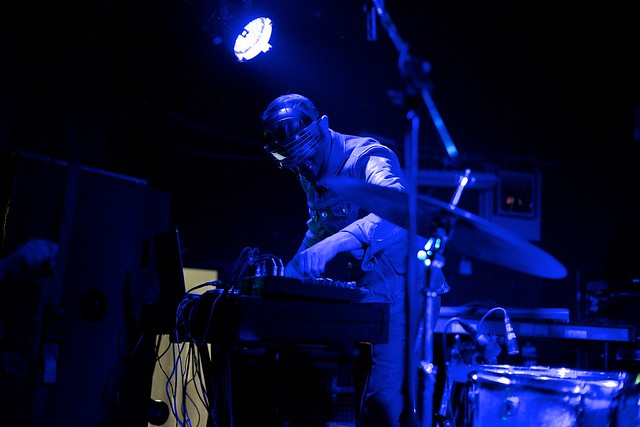 Off course being a tight proficient band is wasted if the music is bland. But that’s not something that TOTS can be accused off. Because there’s no vocals, other than the odd sample, they’re not tied to the simple verse-chorus structure, most indie music follows. They also manage to find interesting samples to mix into their music rather than the b-bit crap I mentioned earlier. Adding in the live instruments it gives their music a dimension much electronic music simply doesn’t have. 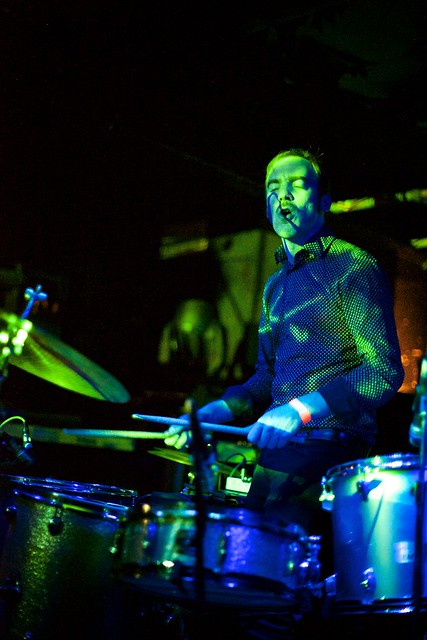 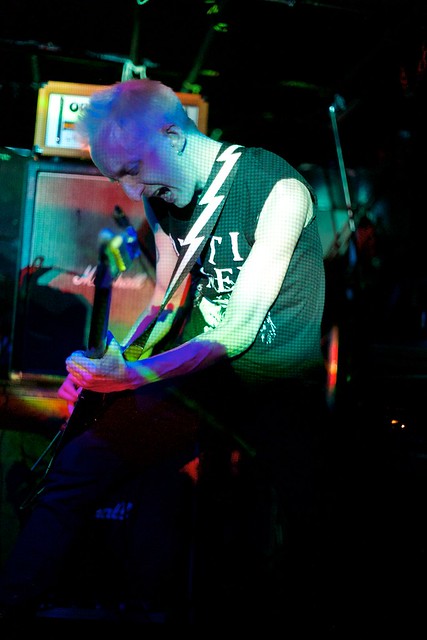 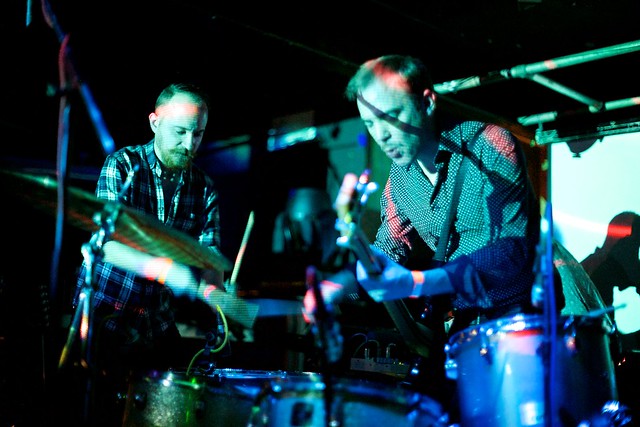