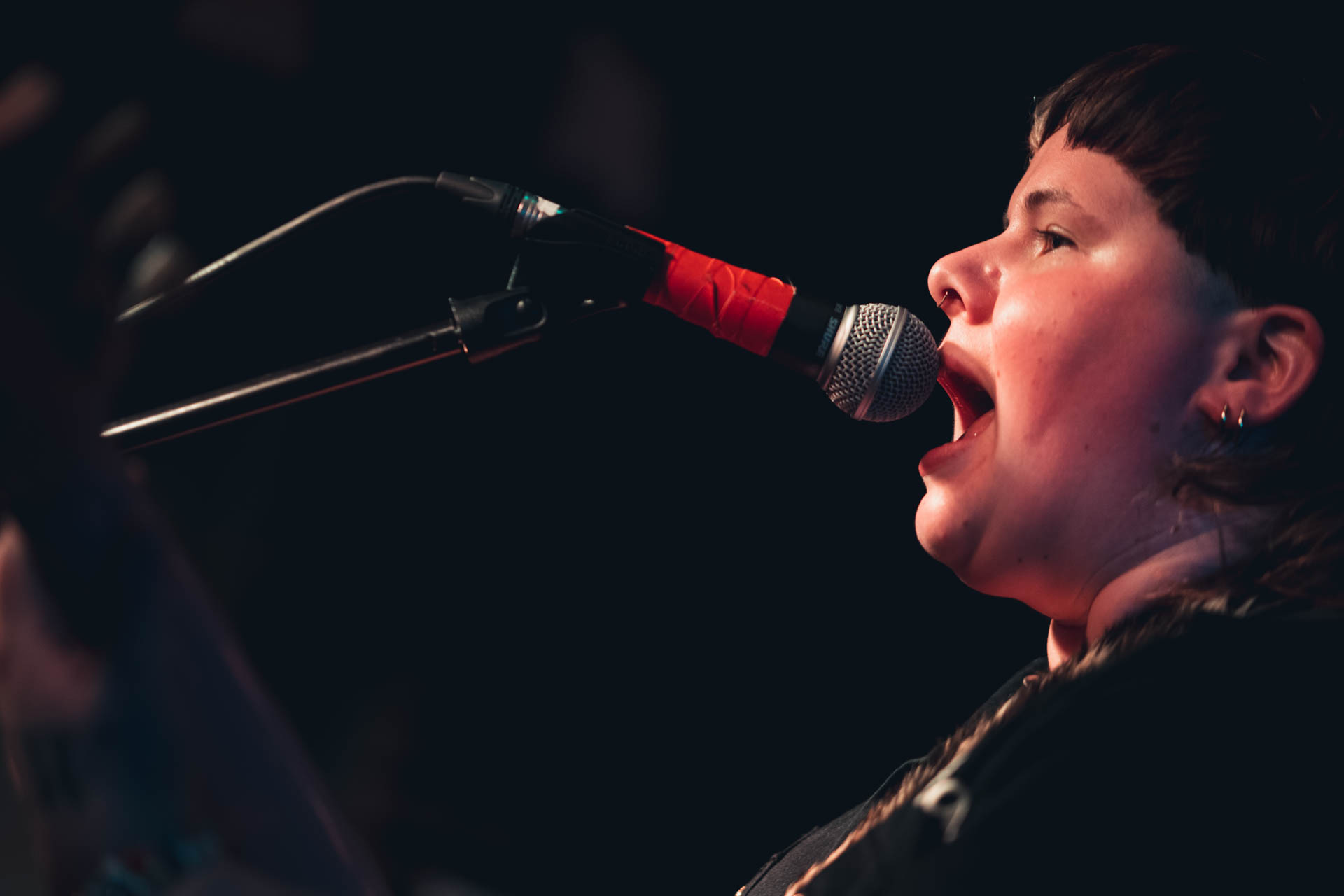 ‘Loud Women’ shouldn’t have to exist. While promoters are improving the representation of female artists in their lineups. There is still a long way to go. For example, a local venue is having a ‘women’s day’ in a few weeks time. While a positive step, it is more a reflection of how few female artists they put on. It is a bit of a catch-22. There doesn’t appear to many female fronted or all female bands in Hertfordshire. So few end up on stage in front of girls who might be inspired to start their own band. Loud Women tackles this cycle and creates a safe space for artists and audience.

I don’t go to many Loud Women gigs. As a male photographer of a certain age. I try to avoid being seen as the ‘creepy old man’. I make a conscious effort to photograph a balance of male and female artists and to do so respectfully. I don’t feel it is right to regularly go along and photograph female bands, just because they are female bands. For me personally, the camera changes the dynamic. I have seen the odd photographer who has been disrespectful and creepy with female artist. It don’t want to be perceived that way. Yes, I know, that then means I only see female-led bands that have perforated through to support slots. But this leads to my second point….

The second reason why I don’t go to many Loud Women gigs is I feel like I am sitting in somebody else’s home with my shoes on. Loud Women gigs are some of the friendliest gigs on the circuit. Every time I have been to one, there is a genuine sense of community. A feeling that women are looking after each other and being inspired by each other. (Loud Women also support non binary artists too). I feel too many men at their gig would undermine that. Perfect example was last night. During ARXX’s set, a small mosh started. Pretty much no men where in the mosh. That little mosh was like moshes when I was younger. Everyone looking after themselves. None of this macho crap that happens in moshes now. But if men joined in the mosh, that space would stop being safe. So I kind of feel it’s my duty not to go to too many of these events, if this makes sense?

I went along to tonight’s gig for ARXX. I had tried to catch them a few times and for whatever reason not caught them. The two person garage band is a joy when it works. Drums, vocals, guitar and no complications and they seem to have got the balance right.

It turns out that the gig was for International Women’s Day. Pretty much a perfect gig to highlight some of the inequalities affecting music. Loud Women had released a compilation CD for the day – which was included as part of the entry price. Extremely good value. (And a raffle where I won a Salad LP – even better value!)

Unbelievably, this was my first ever Hope and Anchor gig. I used to regularly drink in the pub after Daylight Music. Despite its legendary reputation. I had never been to a gig. I was expecting a dark, dingy room. Instead it is a delightful little space, with decent sound and lighting (a photographer’s friend). Really quite pleasant.

Despite going for ARXX. The lineup as a whole was great with Gilan, Piney Gir and Arch Femmesis.

First up was Gilan. A singer songwriter from London. Just a voice and an acoustic guitar with a short collection of good songs. There was one standout track for me, I think it was called ‘Vampires’. There was a bit of talking during the set. Why can’t people just keep quiet and listen? But maybe I shouldn’t cast stones, as I seemed to be all fingers and thumbs last night and dropped my lens caps several times which was probably more disturbing than the talking!

I caught Arch Femmesis supporting Benefits a few weeks ago. They are a band I shouldn’t like. Just a guy twiddling knobs on boxes pumping out electronic music and a vocalist. Usually, that’s not enough for me. However, the music is rooted in post punk with thumping post punk base lines providing the anchor for Zera’s talky vocals. Zera’s lyrics are one part angry, one part humour. When she does sing, she has a great punk voice. But punk is as an attitude and this band are definitely punk.

As a regular photographer at Daylight Music. I have photographed Piney Gir many times. I have also grown to appreciate her music. The first time I saw her, I found her music ‘a bit twee’. But that is actually her strength. Her music has a kind of 50s doo-wop style that acts as a vehicle for her and her friends to have fun on stage and because they do, that carries across to the audience. If every artist wrote serious songs and performed in near darkness, I think we would probably stop enjoying music. Piney’s performance was just the right filling between Arch Femmesis and ARXX.

Closing the evening was ARXX, a fun garage rock band. In fairness. The key to any garage rock band is keeping things simple and direct with a guitarist who can play and sing at the same time, and a drummer to anchor the performance. Singer and guitarist, Hanni has a great rock voice and the set was its strongest when they were simply flat out rocking leading to Clara to complain about how hot it was making her and apologising for her squeaky water bottle. It was all very good humoured. Both engaging with the audience and happy to be self-deprecating. The music just worked with no risk of any song overstaying its welcome. Hopefully, I will catch them again.