This was the third time I’ve seen Josh T Pearson. I caught one of his performances at SXSW earlier in the year and found it an intense experience. I bought the ticket not long after SXSW but managed to catch a performance in Cambridge in September and as the gig clashed with a Boro match in Peterborough, I’d thought about giving the concert a miss. However, after pouring over timetables, it seemed like it was possible to get from Peterborough to the Barbican in time for the 8pm start.

As it turned out I managed to get to the Barbican with a good 30 minutes to spare. Which gave me ample opportunity to be appalled at the prices in the Barbican (a beer and a packet of crisps cost over £7). So it unexpectedly turned out to be a rather dry evening.

It was billed that there would be four support acts ‘curated’ by Josh, each of whom who would play three songs. The Barbican website said that Josh would personally introduce each band. This didn’t happen, which was a pity. I would have loved to hear why Josh ‘picked’ these groups.

The first band ‘Big Deal’ really didn’t make an impression on me. Pleasant enough, but also bland. The second band, ‘We three and the Death Rattle’, were an big improvement. Some of the lyrics were rubbish, but the music was actually pretty good.

The third group Cold Specks, has a lead singer with a voice that seemed to have come from the cotton fields of the deep south, rough but full of soul. It seemed like her voice had been lifted from a gospel recording from the 1930s. I believe the lead singer is actually from Canada, but her voice definitely resonates with the gospel singers of the deep south. Personally, I loved her voice and her music.

Rounding up the decent support was Richard Warren with his stripped back 50s sound who had supported Josh in Cambridge.

If you’ve not heard ‘Last of the Country Gentleman’ you’ve missed possibly the album of the year (it’s a close run thing with PJ Harvey’s ‘Let England Shake’). There’s more emotion in just one of it’s 10 minute long rambling songs, than most bands excise in their whole career. You feel like you are listening to the sound of a tormented soul asking for redemption. Before SXSW I’d never heard of Josh T Pearson and if I hadn’t seen him live, I’m not sure I would have ever picked up this great album.

Live, I think Josh’s music needs the right venue. I’d seen him play a church in Austin and the setting was just perfect. Tall, dressed in black with his long beard, he cut an imposing figure standing at the front of the church. He was the preacher and we were his congregation. His songs at time seemed like hymns being sung by a tormented preacher looking to us to give him the redemption he was seeking. This was the perfect setting. I don’t think there will ever be a more perfect setting for his music.

The Barbican, is not a Presbyterian Church. It’s cavernous stage dwarfed even Josh’s imposing physical presence. But nevertheless, as soon as Josh uttered his first words, his presence filled the theatre. It helps that he matches his intense music and a wry, self deprecating sense of humour. The only downside is that with most songs clocking 10 minutes, the time flew so quickly it seemed that just as he was stepping onto the stage, he was stepping off it again. But when every word uttered comes from the depth of your soul, I’m sure there’s only so much a man can sing in one evening.

I’m not sure enjoyable is the right word to use for a Josh T Pearson’s performance. If delving into the darkness of this man’s soul can be called enjoyable, then this evening was a thoroughly enjoyable evening. 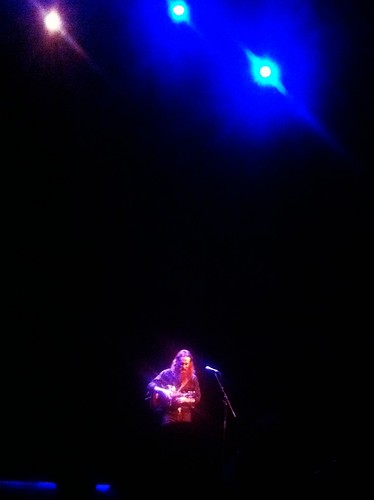 (No photos. So this is an iPhone photo taken at the end of the gig)