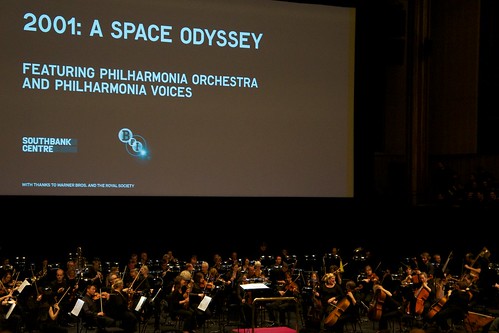 I’ve only ever managed to catch the film on the big screen once, and that was an old dirty print. Over the years I’ve managed to catch performances of a few of the pieces at the BBC Proms, such as the Ligeti pieces used in the film. I absolutely love the Ligeti pieces when they’re played live.  So this event was the perfect opportunity to watch the film, complete with a new high def digital print with the entire score played with an orchestra and choir. There was no way I could miss this.

Unlike similar events such as Lord Of The Rings where it’s crucial for the orchestra to synchronise their music with action. The music in 2001 was always an accompaniment to the film so the edit doesn’t tie what little action their is as closely to the music as it would have done with a commissioned score. This gives the conductor more freedom to pace the music and tonight’s performance was simply wonderful. So unlike previous events, the conductor appeared to by working from scores without any LCD timing aids.

From the very first minute of the opening fanfare of Strauss’s ‘Also Sprach Zarathustra’, this was a pleasure to experience. But it was my favourite Ligeti pieces that were the highlight. Seeing them with the visual accompaniment highlighted only added to the primeval power in those pieces.

Hopefully it won’t be too long before this is played again. I really would love experience this event again.