I’d seen Bombay Bicycle Club at the Haiti Benefit Concert at the Roundhouse. Before this gig, I hadn’t really listened to Bombay but despite this I really enjoyed their short set. I tried desperately to get tickets for one of their acoustic sets during the summer but had been unable to. Unfortunately, this gig was their return to electric so I’m still waiting to hear them play acoustically.

I said at the time of the Haiti benefit that ‘They seem like geeky kids pretending to be rock stars’. This was part of their appeal. There’s an innocence in the lead singer’s voice that he brings to their songs. Tonight re-electrifyed and at a bigger venue, the innocence of my first encounter didn’t come across and for me tonight’s gig wasn’t a patch on the Haiti gig, despite being longer and with a more appreciative crowd. I was still a decent gig. But some of the sparkle was missing. 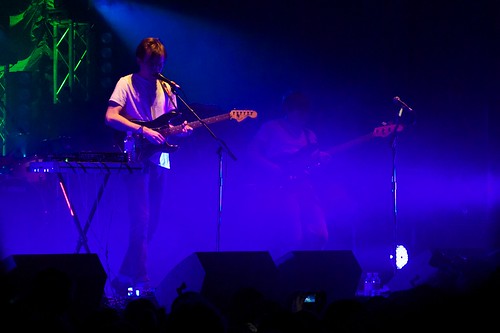 Click on the photo for more photos from this gig.