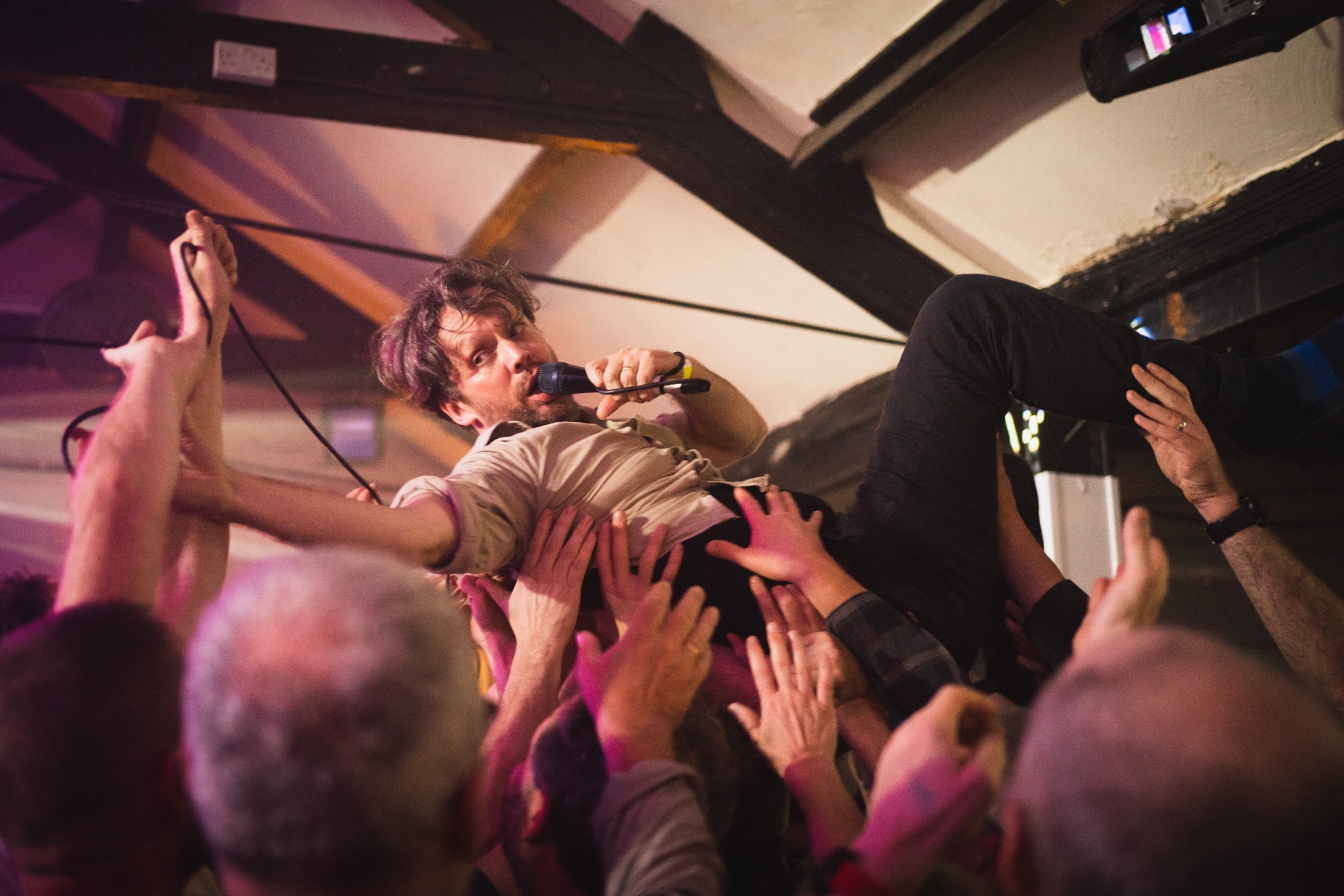 Sea Power at the Venue

It feels like I’ve been standing here for so long, waiting for normality. Throughout lockdown there were a few things I was looking forward to, that for me would signal normality. Returning to Daylight Music was one, getting back to live football another (still to do), and seeing British Sea Power was the final one. I had decided during lockdown that whenever the opportunity arose, I was going to catch a few of the gigs on their (previously planned) tour and use Sea Power as an excuse to get away from home. Something, like many, I hadn’t done since before times.

It turned out seeing British Sea Power wasn’t going to happen. The band decided to change their name. So tonight I headed up to Derby to see Sea Power!

I have to admit, when I booked the extra dates for Derby and Leicester. I assumed we would be in better times. While ‘Freedom Day’ opened everything up. It also increased COVID rates to 40K infections a day and one thousand deaths a week. So I really questioned if it was sensible and safe to head to venues I didn’t know. It was only really the day before I decided I was going. Even then, I partially bottled out on the day, deciding to drive rather than catching the three different trains needed to get to Derby.

At times, reality seems like another language. I still wear masks indoors. I do a lateral flow before every gig. When I walk into venues, I look around checking for air con units, exits, windows. Anything that might make the room safer. I’m even trying to feel the hairs on my arms being stimulated by air flow. I’m gauging where’s best to stand to reduce risk. Even moving if I think there’s somebody coughing without any mask. Meanwhile I’m masking up with FFP2 masks, even if I’m the only one. At the moment, ‘Down at the front’ is not comfortable being at the front. But I’ve figured that it’s probably safer than being further back surrounded by people.

Tonight, The Venue completely failed my ‘once over’. No signs of air con. A single door into the building but no real signs of airflow. They had made little effort to make the space safe. If I lived in Derby, it would immediately have been added to my ‘no go’ list. I had to hope that the fact the Sea Power audience are a little older, few probably still have kids at school and therefore it would be relatively COVID free and hope that if there was somebody in the audience, my mask would do it’s job.

Opening the evening were a new band to me, Pale Blue Eyes. They have a shoegaze psych pop sound. A washy guitar, anchored by a solid rhythm section. I enjoyed the set and the band continued to grow on me at subsequent gigs. I will keep an eye on them.

Over the last few months we have been meeting up with friends and family. I’ve found it amazing how quickly we are back talking where we once went, like nothing had happened. Tonight, was just like that. Sea Power started from where they left off, replacing the Hercules we’ve all tried to be, with the heroic sounds of Formby and there was no need to dwell on our shared experience. We both needed tonight and we both knew it.

After 20 years, Sea Power have an amazing back catalogue. They have so many fan favourites. There is always something I would like to see that is missing from the set. But tonight’s set was a great set to return with, featuring a mixture of songs from the last 20 years, starting with Heavenly Waters from Decline. An inspired choice. It’s an instrumental that gradually builds up into a crescendo of noise and then ebbs away and then washes back in again like a tide. That’s very much how we all felt. There was a pent up expectation and pent up emotion. It was no longer the tide washing in and out. It was our emotions. We had waited for this moment for so very very long.

From that moment, I was lost in my emotions. I have to admit. I felt like shedding a tear.

Tonight was pretty much the perfect gig. We were back. The world felt normal. You could feel the emotion in the room. Everyone was on the same page.

Sprinkled throughout the set were new songs. Two Fingers is an immediately favourite, which I have to admit surprised me. It didn’t grab me when they released it as a single. But I could say the same about Bad Bohemian and Machineries or Joy. They also didn’t grab me until I heard them played live.

The usual fan favourites were in the set. With the name change, Waving Flags felt especially poignant, putting up ‘two fingers’ to the minority who have not been happy with the band changing their name. By the time they played this. The packed room was bouncing. (making me very uncomfortable). I was surprised that Yan went crowd surfing at the end. I thought he might be careful, to avoid the tour being cancelled due to COVID. But we both needed tonight…….. and it was everything I needed it to be. At times through lockdown, it was music that grounded me and helped keep me sane. But tonight it released me. It gave me a little sense of normality.

The past is like a foreign country. So goodbye British Sea Power. We’ve avoided the landmines. Welcome to the heroic sounds of Sea Power……… I love this band