It’s a few years since I last saw HMHB. They’re one of those bands that don’t play live often and when they do, choose out of the way venues (well for somebody who lives near London). Tonight they again avoided the big smoke and headed for the august surroundings of Cambridge.

The venue, ‘The Junction’ sits in a ‘leisure park’, one of those no go areas for anyone over 25. But this was Cambridge after all, and it all looks very civilised. The venue is small and intimate, perfect from HMHB. As usual the crowd was male and old. 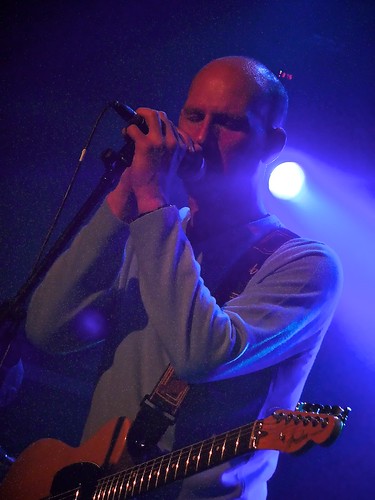 There was no support for HMHB. Instead it was straight on to the main event. HMHB came on about 8:30 and for nearly two hours blasted through a number of crowd favourites and newer tracks.

The gig was the usual relaxed affair. With the usual air of ‘amateurishness’ and regular banter with the crowd, a HMHB gig always feels like your part of the gig. A slick HMHB just wouldn’t work.

The set list covered the majority of the band’s output, with songs from most of their albums. For me it wasn’t necessarily as ‘crowd pleasing’ as it could have been. HMHB played a number of songs of Csi:Ambleside, such as ‘National Shite Day’, ‘Bad Losers On Yahoo Chess’ and ‘Evening of Swing (has been cancelled)’ are all good songs, but a number of firm favourites such as ‘Four Skinny Indie Kids’ and ‘Secret Gig’ weren’t included.

As usual crowd pleasers such as ‘Joy Division Oven gloves’ went down a storm. Although fewer people than normal had brought theirs, it didn’t stop the crowd from joining in with song.

A HMHB rarely fail to deliver and despite the set list, tonight was no exception.