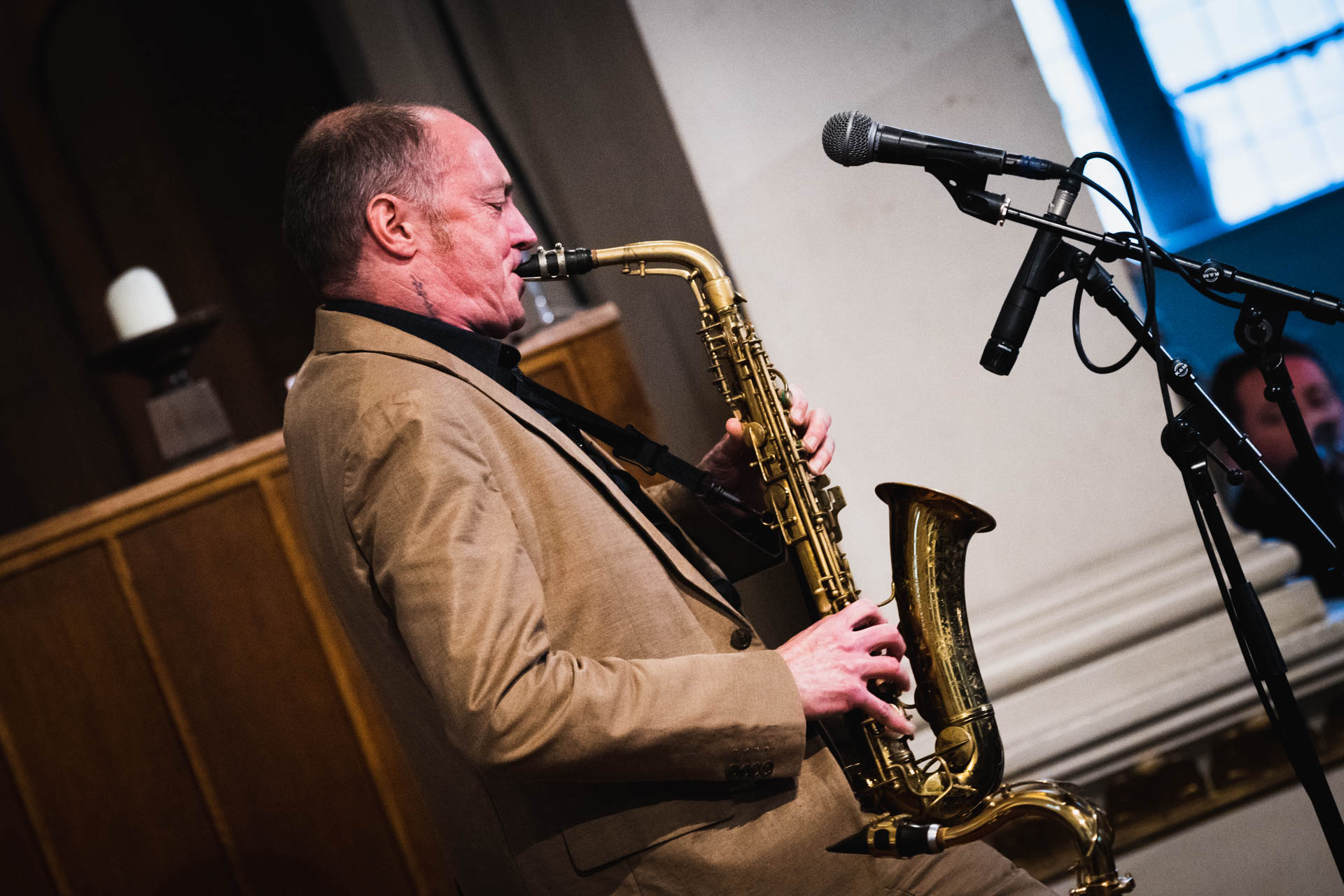 This weekend’s Daylight Music was curated by Terry Edwards as part of the London Jazz Festival. Featuring his Near Jazz Experience and his hand picked selection of artists. It proved to be a very popular session and a much needed boost to the returning Daylight series.

Welcoming the audience as they arrived to St John’s in Bethnal Green, Paul Cuddeford’s blues on a steel guitar gave the audience a hint of what to expect. Today’s curation is very much a near jazz experience. Music that skirts around the edges of jazz but shares much of its ethos. Something the discerning Jazz audience seemed to engage with. Well most did, apparently two ladies left after the first act proclaiming to the volunteers on the door ‘that wasn’t jazz’. Nice to see they have such an open mind to new music

The offending artists were BAG. They mix spoken word with various electronic sounds and music. To be fair to the two ladies. No it wasn’t ‘jazz’. But there was a theme today. Terry’s choices put vocals at the fore. In this case, the vocals used to deconstruct our expectations of musical structures – a bit like the improvisation bits in jazz. Vocals speeding up and slowing down, accenting different bits of variable length sentences. All the time, forcing the music to shift form. I can see the connection. But to be honest, who cares. It was a fascinating performance.

Deconstructing music continued with a pair thrown together by Terry, soprano Jan Goodkin and pianist Rod Melvin. Who explored Terry’s idea that the songs of the Smiths have some similarity to plainsong chants. Again, plainsong is not Jazz. But the idea of two musicians who hadn’t met, coming together and using the rules of plainsong to work with each other’s performance has some of the spirit of jazz.

I’ve never liked the Smiths. Or rather, I’ve never liked Smiths when sung by Morrissey. I enjoy their songs far more when covered by other bands without Morrissey’s annoying voice. But I will begrudgingly admit the music and lyrics are often brilliant. Today, stripped back to a minimalistic interpretation on the piano and Jan’s terrific singing of plainsong, the songs also gained an absurdist humour that I would never have connected to the Smiths.

The two ladies would have hated it. I loved it

Continuing with the theme. Jem Moore gave us his fascinating interpretation of Shelley’s The Masque of Anarchy. His bass playing perfectly complementing the darkness in the poem.

The two ladies would have hated it.

Closing Terry’s curation was his own band, The Near Jazz Experience and for once there was some improvised jazz. Always musical and never inappropriately noodley, I’m sure this was more of what those two ladies were looking for. Although, I’m not sure they would have appreciated the NJE’s excellent take on Hendrix. Maybe they were right to leave after all? Me, I loved every second

Daylight’s strength has always been its ability to challenge. Occasionally these invited curations play it safe. But more often than not, the curator rises to the challenge of selecting a range of music that embraces Daylight’s ethos. Terry’s session more than did that. Hopefully some of today’s audience will have understood what Daylight Music is about and enjoyed their experience and return in future.