Rhythms of the World is two day ‘town’ festival in Hitchin. It markets itself as a ‘World Music’ festival but it’s increasingly becoming a festival that’s based around indie and rock and roll, as represented through the large number of local bands. The festival has grown substantially over the last decade and has become an important date in Hertfordshire’s calendar. At £7 per day, it’s cheep, however, it’s expensive compared to the free concerts many towns now provide.

I’m from Middlesbrough and both Middlesbrough and Stockton provide free festivals featuring known acts. This year Stockton’s Riverside Festival included British Sea Power, Human League, Mercury Rev, along with many up and coming acts and comedy acts. These festivals are organised and supported by the local councils and attract large crowds from outside of the towns.

ROTW used to be a free festival, based within Hitchin’s town centre. But unfortunately Hitchin is a posh southern market town full of middle-class families who, rather than controlling their kids, blamed the festival when their children got pissed during the festival weekend. So a few years ago, a decision was taken to move the festival to Hitchin Priory so that the it could be policed. Since the council doesn’t finance the festival, this meant a charge had to be introduced. Unfortunately the move in my opinion has had a detremental effect on the festival because this changed the nature of the festival and to be honest it also means the music has to justify the admission price, and this year there were slim pickings.

One problem the festival suffers from is an over familiarity of the acts, with many returning each year. Some of the local acts often aren’t good enough for such a large stage and the ‘introducing’ stage is full of ‘college bands’ playing skater rock, or bland indie. The ‘world’ aspect is often covered by white middle-aged middle-class people playing ‘ethnic’ music, or some so called ‘traditional’ north African band playing electric guitars, along with a few bands playing some sort of eastern european ‘roots’ music. This year in particular seemed to be devoid of world music. Some of the acts are just plain wrong – with one act in particular turning up each year with a different ‘world’ artist in tow. Maybe I’m just too cynical but I suspect that they’re not doing it to make people aware of different styles of music but use these artists as a means of touring summer festivals. This may sound harsh but I hate people who present themselves as ‘new age’, when instead they using other people to freeload.

I know this is sounding pretty scathing and it’s not meant to be, but I guess the point I’m making is that I no longer see an unique selling point. Afterall £14 is cheap for a two day festival, but once on-site you cannot leave and return without paying for re-admission, so you are reliant on the on-site concessions and it all starts to cost. Many people seem to turn up, find a stage and stay there and this leads to feeling that the event is overcrowded. In the town centre, this wasn’t a problem, people would move around and it never felt overcrowded and it was easy to drop into a shop or pub for food and drink. Although the organisation is really effective, hosting 6 stages in a big field means doesn’t have the same atmosphere as holding the events in different ‘nooks and crannies’ around Hitchin town centre and the new stage layout discourages unamplified music (they used to use Hitchin’s church for acoustic music – while the equivalent stage suffers badly from sound leakage). This year, with more and more bands selected who play music of ‘american’ origin (rock, blues, rap, country, ‘americana’), seemed to really lack the ‘world’ music that gave the town centre festival it’s fantastic mix. Unfortunately this year’s festival was more Radio 1/2 than Radio 3/6. Hopefully next year, they’ll find a way of restoring the balance. 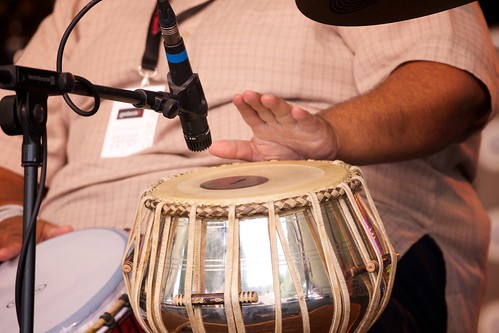