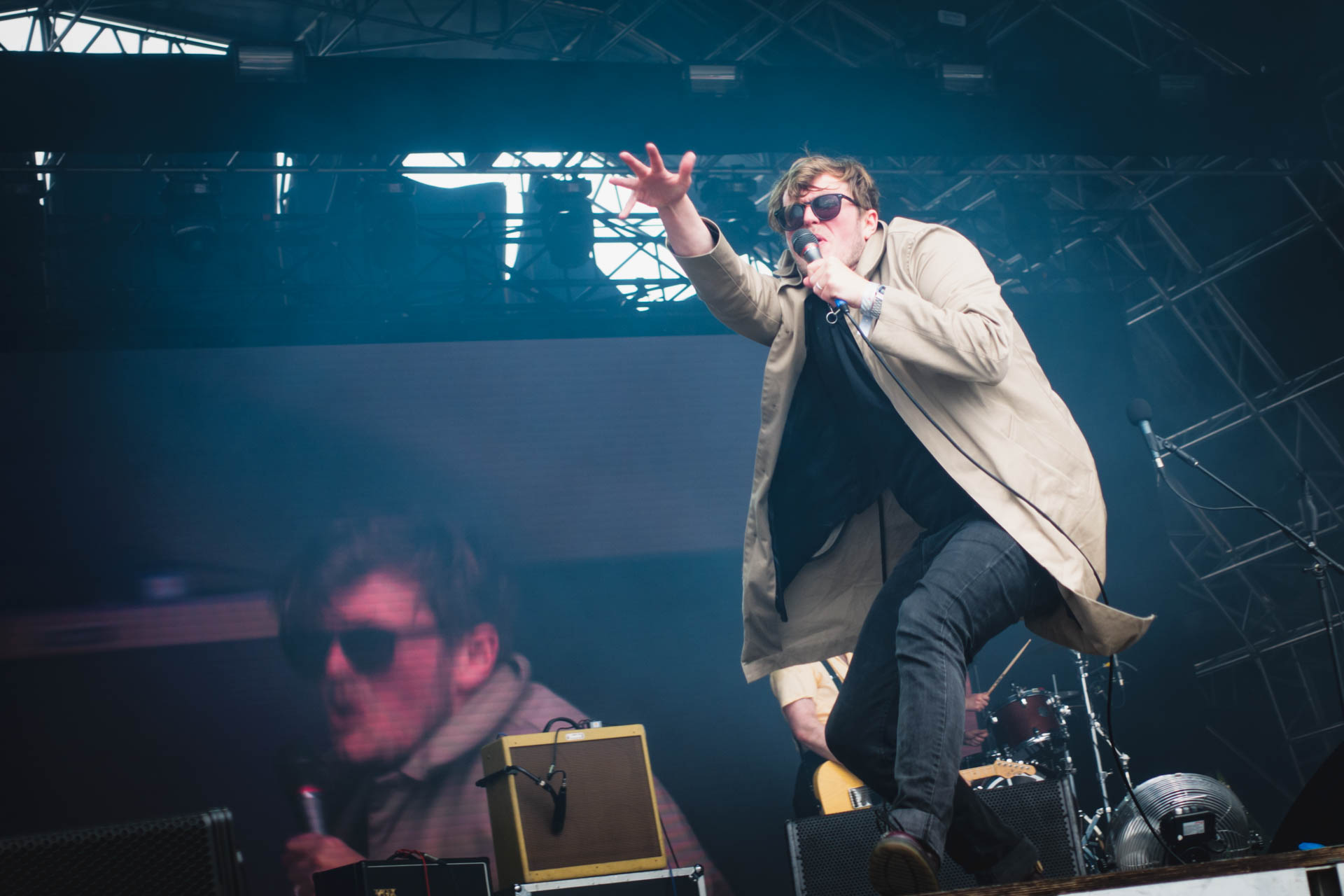 Last year, the first Wide Awake Festival proved to be an excellent addition to the London festival scene. Did the sophomore edition prove to be a difficult second festival?

Last year’s festival came at the right time. Although things were opening up. Several of the early summer festivals had been cancelled, leaving people looking for their festival hit. With an outstanding first festival lineup. The new festival just hit all the right spots and understandably won the ‘Best Small Festival’ at the BandLab NME Awards. So it was always going to be a challenge to follow up that success. Even though the lineup wasn’t as strong as last year, in the main, I think they achieved that difficult job.

Unlike last year, I had no photo pass. There wasn’t much opportunity to take photos (I only had a pocket camera with me). So I decided to take it easy, enjoy the music and have a few beers.

With this being the ‘difficult second festival’, things didn’t start off well. Sadly, a stage wasn’t ready which meant shuffling around the lineup. I believe the stage was used the day before. I suspect they decided to move the stage to avoid sound leakage which had been a problem last year with this stage. This knocked some of my plans, causing some clashes. But in all honesty, like most festivals, my plans went out of the window the minute I set foot inside the festival.

The great thing about this festival is that it is booked by the people who are the movers and shakers of the London scene. These are people behind places like the Shacklewell, Moth Club and Windmill, so know their stuff. As James from Yard Act said, we are lucky to have people like Keith Miller from Bad Vibrations taking the risks to break the acts, the other festivals pick up on later. He has made me aware of so much good music. I am pleased the first festival was such a success and hope it continues.

Like last year, I had issues with trains meaning I arrived after doors opened. Luckily MELTS were still playing when I arrived and managed to catch the last three songs. The Melts were one of the bands I wanted to see. They reminded me a bit of the Horrors (who were playing later in the day) – but with less goth. Definitely have to catch a full show.

Heading to the nearby Moth Club stage, I had just missed their opening act. But I decided to stick with the stage to be at the front for the ever brilliant Crows. As always, the Crows showed why they are one of the most underrated bands in London warming the crowd up for the day to come.

Next up was the main stage where Katy J Pearson was playing. I had seen her previously at the Lexington in 2020. There were too many country vibes for me. I thought it was worth giving her another chance. Today, these vibes were less obvious, but I didn’t hear anything that stood out.

After a brief stop off for a drink. I headed back to the Moth Club stage to catch the Nation of Language who I had been hearing some very good things about. Their sounds was very strongly influenced by the 80s, with kind of Depeche Mode vibes. I am afraid they didn’t do much for me so I decide to bounce around the stages, first giving Platonic Erotica a listen, but finally ending up listening to Fatoumata Diawara on the main stage. With her Malian, West African blues, she seemed out of place for a festival mainly focused on the indie scene. But brilliantly out of place. It was just the type of music I needed to perk me up after two bands failed to hit the mark. I think it is impossible not to dance to the blending of the blues tradition with Malian rhythms.

Being close to the front, I decided to stick to the main stage for Yard Act. I was expecting this to be my festival set of the day and was not disappointed. Their dry sardonic music transferring to the big stage brilliantly with James initially berating the crowd for not being up for it and gradually finding himself ‘won over’ by the enthusiasm of the crowd, singing our praises by the end. It is all an act. But it was one the crowd loved. He was chatty throughout. With self deprecating humour, even pausing to discuss if he was getting a bald patch after seeing the back of his head on the big screen. I know it has been said before. But he has that kind of charm Jarvis has. These guys are only going to get bigger. Towards the end of the set, he invited Nuha Ruby Ra and Katy J Pearon on stage to cover ‘Roadrunner. by the Modern Lovers. In all honesty, it wasn’t very good. But that’s not the point of these festival covers. It is more to make the audience feel like they are hearing something unique to them.

The shuffling of the stages caused my first problem of the day. I quite like the Fat White Family’s output. But I had only seen them live once. Billy Nomates, I wanted to catch at the Great Escape, but both were on at the same time. I decided to catch little bit of both. After an explosive and enjoyable start by the Fat Whites, which saw Lias immediately head into the crowd and cavort around on the speakers, I headed off via a bar to see Billy.

Unfortunately, sticking to the main stage meant Billy had already started and there was no easy way of getting a decent view, as the tent was already busy. I thought I had a view of the stage and then a security guard blocked my view, so I headed to the back and just listened for a while. In all honesty, I could see nothing on stage. I hadn’t realised Tor still plays with just a laptop. Although I could see her head bop up around the stage, I could see little. What was obvious though, her voice was pretty brilliant. But seeing nothing, I felt I was ruining the experience. There is a reason why this site is called ‘Down at the Front’. If you can’t see the performer, you might as well be listening to their recorded output. I decided rather than ruining the live experience, she deserves to be seen in a better venue. Her voice was that good. So I headed off to see the Leisure Society who were great, as always.

While at the Leisure Society stage, I bumped into a friend I hadn’t seen for a long time and went with her to watch the Comet is Coming. I have to admit, I chatted through most of their set. But what I heard was really great. I think they could play pretty much any festival as they mix genres. One part jazz, one part rock, one part EDM. They produced a thunderous danceable music. Really impressive.

Although the festival still had another two hours to run. I wasn’t interested in the headliners, Primal Scream. I wasn’t a fan back in the day and decided I would not stay too late and risk the usual poor Friday night train service.

Before heading off. I wanted to catch Automatic. I hadn’t noticed them on the bill until a friend mentioned them earlier in the day. As their 2019 album was one of my favourites from that year, I had to catch them and I was really pleased I did. They have an early 80s post-punk pop feel. Guitars replaced by synthesisers.

Closing the evening, Amyl and the Sniffers. I have seen them twice. While their second album was more melodic. Live, they aren’t my thing. I grabbed a beer and watched a few of their songs before heading off to catch my train.

Like a difficult second album. It was always going to be a challenge to live up to the massive highs of the first festival. In the main, it was another success. Except for the stage issue, which they coped with well. The rest of the festival was brilliantly organised. There was an excellent range of (albeit expensive) food options. There were no queues at the bars. The addition of excellent local breweries was a bonus. The VIP area was a good place to escape to and only a £20 additional cost. Sound in the main, was as good as can be expected at these open air stages. Really, there was nothing to grumble about. I had an enjoyable day. In fact I have already bought my early bird ticket for next year.