Another poor attendance at a Coffeehouse Session at the University of Hertfordshire. Honestly, if I ran the Coffeehouse Sessions, I’d drop Hertfordshire from the circuit. Our students simply don’t care about new music. In fact, almost everyone actively watching was a member of staff. Maybe the timing’s wrong as it is during lecture time, but as I’ve been to many poorly attended events, it has to be our students.

Today’s session was from an enthusiastic guy called Johnny Lucas, who as he kept reminding us, uses a repeat pedal to build-up the song (yes, we know what a repeat pedal does). Unfortunately for Johnny, his enthusiasm was probably lost on a bunch of middle age staff (Did I just write that? Bollocks, I’m getting old). But I’m sure with a more cooperative audience, they’d like the effort he put in and despite the audience he played with the same enthusiasm through songs off his latest EP. 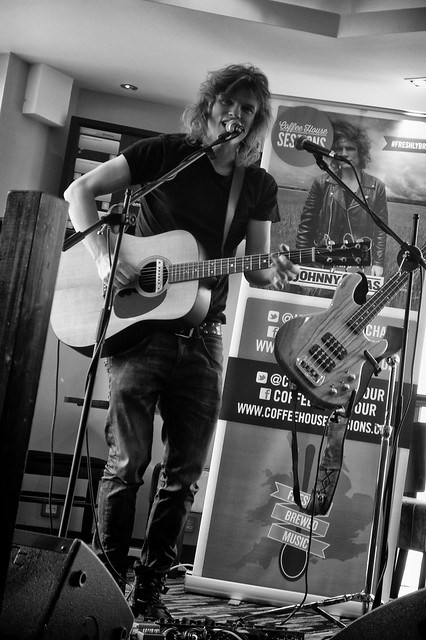 He mainly played an acoustic guitar adding vocal and beat-box repeats along with bass-lines from the bass guitar he had on a stand. Each repeat adding an extra layer, building up his song. I’m not sure how much his repeat pedal added to some songs. Some I felt would have been better with less layers as some of the songs seemed to take too long to build-up. But it’s probably nit picking. Probably the most successful layering was his vocals. Johnny’s got a pretty decent rock voice and the repeat pedal allowed him to lay anchoring vocals so at time he could really let go. The highlight was his excellent cover of Seven Nation Army / Sweet Dreams mash-up even seemed peak the interest of the few students watching. 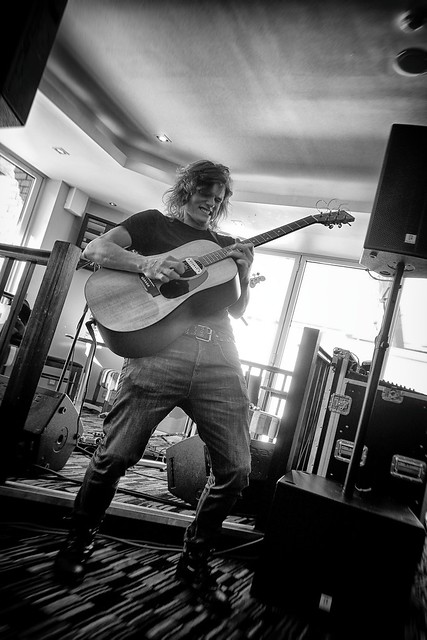