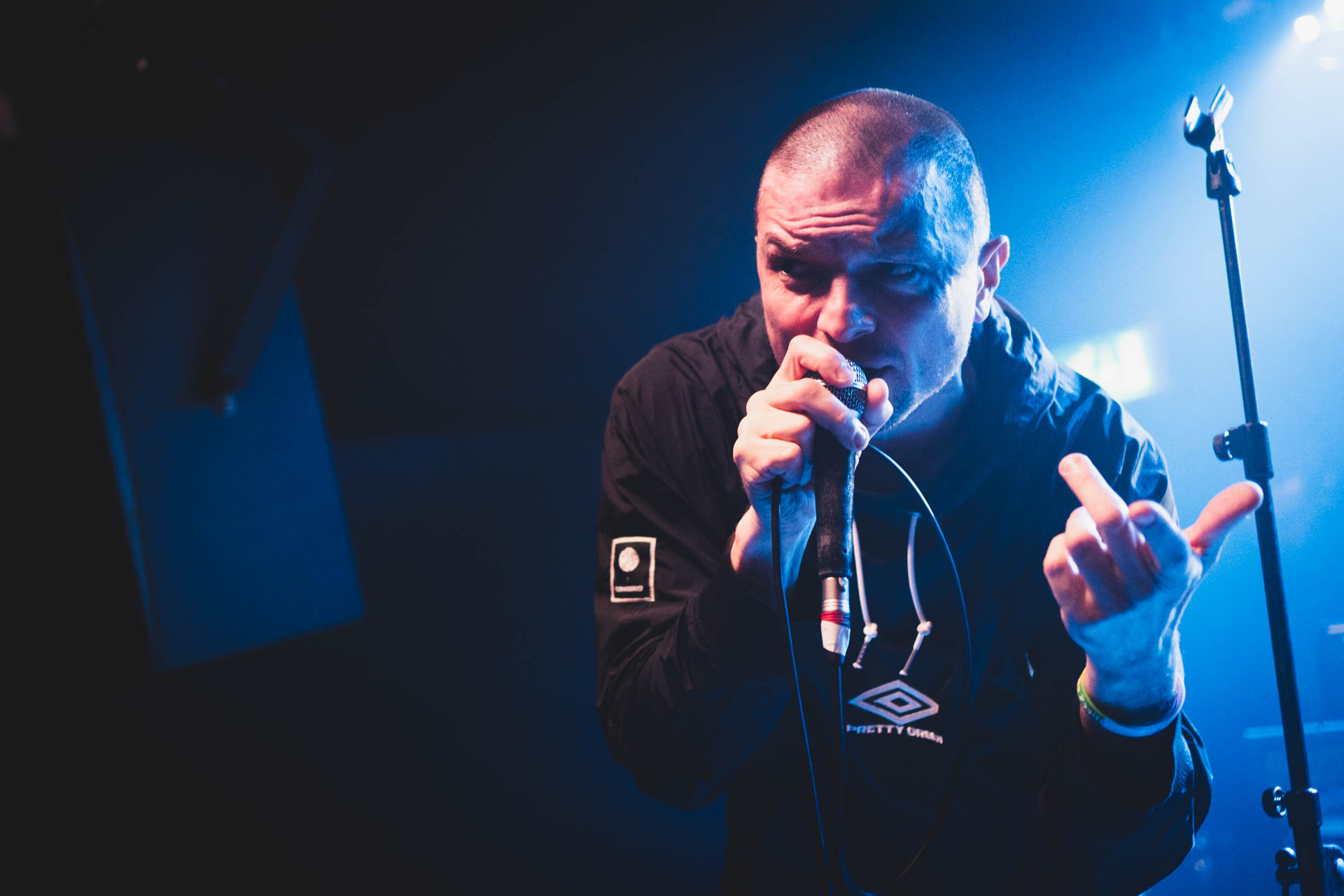 Benefits at the Grace

In 2011, I saw an excellent documentary at SXSW about a record store in Stockton-on-Tees, ‘Sound It Out’. It was odd to fly thousands of miles to reconnect with the area you still call home, but only visit three times a year. The documentary featured several Teesside artists. One of these was the Chapman Family, who produced angsty gothy noisy indie.

Towards the end of their run, the Chapman Family released the excellent ‘Cruel Britannia’ EP which featured several songs that foreshadow Benefits. Reacting to the early years of the Tory/Lib Dems austerity and the rise of UKIP, it featured angry songs concerned with the darkening mood of country and what this might lead to. Sadly, not long after the EP was released they were gone. But clearly Kingsley Hall still has a lot to say and he’s back with his new band, Benefits.

As some kind of symmetry, Benefit’s first headline London show was at the Grace, previously the ‘Garage Upstairs’. I’m sure this was the location of the Chapman Family’s last London gig.

Teessiders are an interesting bunch. While proud of being Teessiders. We have what was once described by a southerner friend as having ‘a chip on our shoulder’. A sense that we’ve been dealt a poor hand and that no one is bothered about us, when in our eyes they should be. We feel like we’re up against the odds from birth and so we have to stick together through thick and thin.

I guess there is some truth in this.

After lockdown I returned to walking around London. Everywhere I walked there was signs of change. Something I have never seen walking around Boro when I go home. Areas of the town that were run down when I left for Uni 30 years ago, are still run down. Crime, especially drug related, has increased significantly. More industry has gone, replaced by insecure jobs. The local schools are amongst the worst in the country. Kids on Teesside amongst the least likely to go to University. Even life expectancy is amongst the lowest in the UK. Sadly, the area doesn’t feel like it’s got a future and understandably many feel abandoned.

Sadly, this has seen the rise of a fear of foreigners, which has built upon an existing prevalent casual racism. Teesside is a predominantly white area. 6% of the population is asian. Less than 1% is black. It’s never quite shaken off its racism. As you find in many Northern towns, there’s little mixing between whites and Asians and the level of racism always surprises me when I visit home or I mix with Teessiders at an away match. When all your industry has closed, unemployment is high and opportunities for the young, poor. A government policy to dump more asylum seekers in Middlesbrough, than in the whole of the affluent South East, was sadly only going to stoke fires. Teessiders like to think they’re a friendly bunch. But to me as an ‘outsider Teessider’, if that was ever true, it’s long since passed.

Teesside is BREXIT central. After 40 years of EU membership and things only ever getting worse. Remaining was just as much a unicorn position. Stay, things are unlikely to get better, just worse. Leave, thing might happen. Sadly, taking in the lies and half truths has turned Teesside into a place where if you don’t look or sound like a Teessider. You are to be feared.

This is the world of Benefits. Benefits is a reaction to the reaction. While I see Teessiders as the abused and make (too many) excuses for their brexity attitudes. While I try and make comfortable southerners realise when they visit my home town and come back and call it a ‘shithole’, to think about what opportunities such a place offers those that live there. Benefits have decided to tackle the ‘little Britain’ thinking in many working class towns head-on. There is no way they are going to make excuses. It’s clear they think it’s time you saw through the lies.

I have a lot of time for Kingsley. I can see a clear connection between the last few years of the Chapman Family and Benefits. Chapman Family sounded the warning. Benefits are dealing with the aftermath. It’s good Kingsley is back doing what he is best at. Shouting at the world trying to be a positiive action of change. And it most definitely is a world that needs to be shouted at.

I wasn’t sure what to expect tonight. Tracks released so far I guess could be described as industrial noise poetry. Think Nirvana’s ‘Endless, Nameless’ with angry reactionary performance poetry. It’s the most punk thing I’ve heard for many years. But usually after listening to a single Benefits track, I feel wrung out. What would I feel like after a whole gig?

I shouldn’t have been worried. Now don’t let anyone know, but they have a few tracks you can actually dance to. Angry noise disco! Okay. The tracks aren’t going to hit the clubs, but they add a welcome break for Kingsley’s voice and our stress levels. Kingsley himself is always affably earnest between songs. I think he’s as surprised as anyone by the recognition they’ve received from people like the Sleaford Mods and Frank Black. But based on tonight. It’s well deserved. Benefits are visceral and just what 2022 needs.

Going back to SXSW in 2011. Bob Geldof gave a keynote. He was pissed off with modern artists. He decried the fact that too much music was produced by the middle classes and none of them were reacting to bankers forcing austerity on to the poorest for the mistakes they made. In his view we needed a ‘new punk’ of miserable, shouty, sweary, angry voices, who want to change the world.

Clearly that didn’t happen. No one shouted and things got worse. Nationalism has been on the rise and the gap between rich and poor, widening at a rate greater than at any point since the turn of the century.

Well Bob. Your wish is granted. Benefits are the angry voice you asked for.

Right from the off. We are hit with a wall of noise as Kingsley deftly builds each piece of well observed, but seething poetry, up to the point where he’s screaming into the microphone as the wall of noise crashes into the crowd and we hold on like a little boat in a storm. Just when you think they’ve reached 10. They find 11. I’ve not seen anything like them. To quote Douglas Adams. Listening to Benefits is like ‘having your brains smashed out by a slice of lemon wrapped round a large gold brick.”

The themes are similar across most of songs. Pretty much all are reflections on ‘little Britain’. Written as a plea to those fooled by the lies of nationalism to look up and not down. To ignore false dreams of a ‘Great’ Britain, of empire, of isolationism, of ‘Britain first’. To stop punching down. To look up and remember to punch those who want misdirect you. This isn’t an ‘arm around the shoulder’ kind of music. Benefits want to shake you out of your trance. Part of me is uncomfortable attacking my own. But maybe this is the only way. Reactionary music for a reactionary time.

The hype is justified. Benefits are just what 2022 needs.

Before finishing, I have to mention the support, Arch Femmesis. I love when artists surprise me. My initial reaction when they started was that I was going to hate them. I’ve seen loads of bands over the years wander onto the stage with a knowingly ’80s art school’ vibe that have turned out be terrible. Instead, they have some cracking danceable electronic music with driving post-punk basslines. Zera, the lead singer is funny, angry and a great performer. This is 80s electro art pop, but with a 2020 twist. It worked for me. Yes, I’m surprised to be saying that too.