A new venue for my current favourite band, The Ministry of Sound, best known for it’s dance music nights, and what an arse of a venue it is. Getting in was a minor effort going through multiple layers of security. Something you don’t normally see at indie venues is a sad reflection of what the dance music scene has turned into. So the evening was off to a bad start. We then were held for hours in a holding room as they setup for a live feed in a god awful expensive bar meaning there was no advantage of getting to the gig early

Signs were also put up requesting we do not photograph the gig. I don’t mind bands asking us, but it’s a load of old bollocks that it stops you concentrating and enjoying the gig. Yes, the mindless majority who just hold their iPhones up are a menace and do disturb many concert goers, but I try to not use a camera unless I’m at the front where I can keep it relatively low. But in my case it increases my enjoyment of the gig because I watch the performance more so that I can gauge when to switch on the camera and take photos and makes me feel more connected to the gig. But in this case, it was complete hypocrisy because the Savages themselves were filming the gig.

Once into the main venue, we found that the band had decided to create a circle (with no stage). I was instantly asked to move by a cameraman. Sorry, who’s paying to watch the band. Needless to say after the hypocrisy of the signs, I refused to move. They had more than enough time to set up and keep camera sight-lines clear. 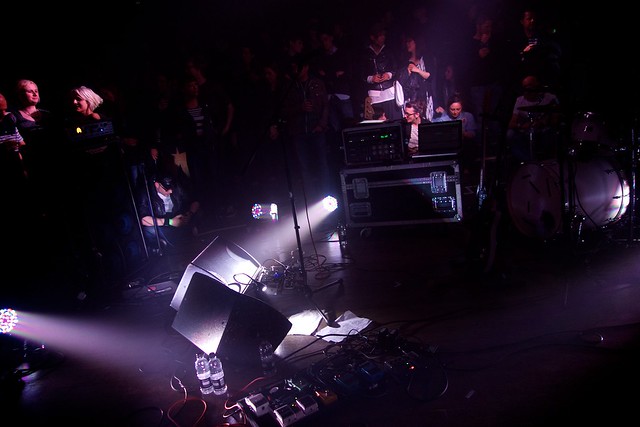 Eventually when the Savages arrived. They were their usual excellent selves. The circle worked really well  as I almost felt part of the performance. But I was lucky. I was at the front of the circle. People at the back wouldn’t have seen anything. So it’s not really a model for future gigs. The downside of the amazing performance was the Savages own cameramen who roamed around the edges of the circle getting in our way and causing people to move. So much about our cameras disturbing other concert goers. But I’ll forgive the Savages for almost anything, I simply love their music and their performances.