British Sea Power again. This time at The Junction, Cambridge. As is typical at this venue, the crowd was a mixture of old buggers like me, and young teenagers. I always find this odd. With Cambridge being a student town you would expect students to attend these local gigs, but so far they’ve been absent.

Tonight’s support were Bo Ningen. A Japanese heavy rock inspired group who love playing with noise and feedback. I’d seen them support BSP at Tan Hill Inn and although I missed some of their set, loved the numbers I saw. Again, they were great. I’m not sure why they’re great, but they’re one of those bands who just bring a smile to your face. They just seem to be enjoying themselves and don’t really care if you are. (Which means you usually are). I’m not sure they’ll ever move from being a support act. I just can’t see them winning over the masses. But they’re a great way to warm up the crowd. (And in the case of one young lad who was with his dad – I think some sexual confusion. He seemed rather concerned when his dad told him the lead singer who was wearing a dress and has very long hair, was a bloke)

If you look around my blog, you can see that I’m a fan of BSP. So cutting to the chase, they were pretty good tonight. The sound was pretty decent overall. Yan’s vocals were stronger than a recent gigs, however, Hamilton’s vocals at times were a little low in the mix.

With a young audience, there was the standard teenage uncontrolled ‘moshing’ at all times. I’m too old for regular moshing (dodgy knee and all that), so I tend to stand at the edge of the moshing area. But the kids even moshed through some of the slower numbers which suggests that many didn’t know BSP’s music. Hopefully BSP’s performance will have converted a few of them.

At nearly 2 hours long, it allowed the time to mix old and new. I’m not sure the balance was completely right for this particular audience and I felt there was a lull in the crowd (not BSP) when they played the slower numbers such as Luna. Which is a pity because some of these new songs worked really well live. ‘Luna’ I thought was excellent, though maybe should have been even earlier in the set. ‘Zeus’ gets better every time I hear it and ‘Who’s In Control’ is a great opening song. But I was disappointed that they didn’t give ‘Baby’ an airing. But overall, the new material worked really well.

So when is their next gig? 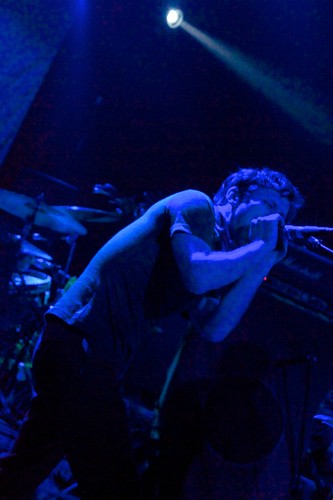