Bit of an odd start to gig. Somebody pushed to the front because they suffered from ‘chronic fatigue”. Obviously the person they asked, moved for them. I don’t want to sound hard-nosed, and probably would have moved myself. But surely you would buy a seated ticket if you suffer from such a condition. Afterall if you don’t think your condition is that bad, then why should somebody move for you. If you ask me, it’s the best excuse going. I wonder if ‘I’m an old fucker so get tired’ would work?

Support act were ‘Band of Skulls’ a band I thought I’d seen before, but it turns out I’d heard one of their songs on an advert.

The ‘Band of Skulls’ are a three piece who seemed to draw their influences from similar sources as The Dead Weather and Jack Whites’ other more well known band, The White Stripes. The drummer had obviously grown up on a diet of John Bonham videos providing the driving force behind the band. The lead singer’s influences coming from Jack himself and at times also had a ‘Kings of Leon’ sound. Completing the trio was the tall female bassist who appeared to draw influence from metal basists. With excellent musicianship this was a very strong set and a band that I’ll watch out for.

It’s a sign of the self confidence that’s apparent within ‘The Dead Weather’ that they could have such a string support act and not feel threatened. But any band with Jack White in it is unlikely to appear to be second best. It helps that the band has one of my favourite female rock vocalist in Alison Mosshart, who’s ‘Rock Star Heroin Chick’ has such a strong presence that she can hold her own in the presence of Jack.

Tonight’s gig was up to the standard of previous gigs and included material from their excellent second album. Alison in particular was excellent and the band seem to get slicker with every gig. 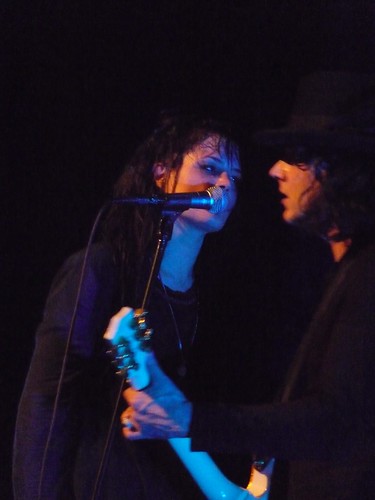